Pay attention to what you're doing 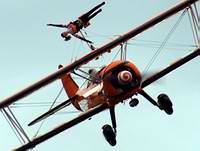 When the pilots first started flying the Baby Breitlings they were distracted by the model wing walker moving around. It may sound odd, but when you fly model planes it's unusual for anything to move on the plane without you, the pilot, controlling it. After a few flights you get used to it though and can concentrate on presenting the plane to the crowd.
Sharon on the other hand found it odd to be holding a transmitter but not to be flying the plane.  She also flies models and on the first few flights she found she was instinctively watching the plane and trying to fly that rather than operate the wingwalkers.

The wingwalkers are operated using the same transmitter you would use to fly a plane.  The sticks and switches move the arms, legs and head and a dial controls the rig rotation.  Whilst it's easy to actually operate the controls, it is tricky to remember which stick controls which movement.  Each arm and leg moves independently, the arms move up and down together and the head also moves.
The most important time to get everything right is when you operate the rig.  The wingwalkers' legs and arms need to be in the right position when you roate the rig otherwise they get caught in the rigging wires and snap them.
Posted by Baby Wingwalkers at 12:31 1 comments

The engines in the 30% Stearmans

The engine is a very important tool for us during the display. Because we are constantly flying lower and slower, so the crowd can get a better view of the planes and wingwalkers, there is little room for error if the engine should stop. 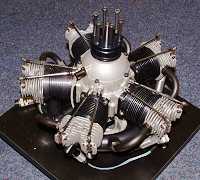 When we first flew the Baby Breitling Stearmans they were fitted with the great sounding Moki 250 radial engines. These engines give a lot of power from quite low throttle settings and have a fantastic sound. Even Sharon who isn't really into engines loved the sound of them.  Unfortunately though, whilst using these engines we had a number of engine cuts which led to a few interesting landings. 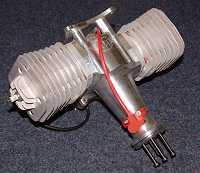 Several types of fuel mixes and types were tried before we gave in and fitted Desert Aircraft 150 engines. Since the fitment of these we haven't missed a display or even had any uncomfortable moments with them. The DAs don't sound or look as good but they keep going, allowing us to concentrate on flying a good display.
Posted by Baby Wingwalkers at 02:53 0 comments