This weekend we flew at the 25th anniversary of Wings and Wheels model show.  Both Steve and Richard have flown a variety of their planes there over the years. 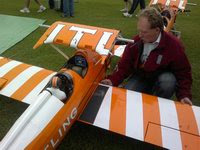 Saturday wasn't a comfortable day for flying.  The drizzle we drove through on our way to North Weald airfield had just about stopped when we arrived to set up but there was a strong crosswind blowing towards us.   The Stearmans are difficult to land at the best of times (a feature shared with the full size) even more difficult to control on the ground in a crosswind.

We decided to fly only one plane for 2 reasons.  Firstly, we have another show next week and no time for any repairs so at least if anything happened to the plane we flew this week we would still have one for next week.  Secondly, when you are flying in gusty conditions the models get knocked around a lot by the wind so even if you aim to fly a straight line you can get blown off course.  This means the formation looks untidy so the display actually looks better with just one plane.

Sunday was a completely different story.  It was hot before the show even started.  The wind had shifted nearly 180 degrees and was now blowing on our backs.  But the wind strength was much lower and so ground control was much easier. 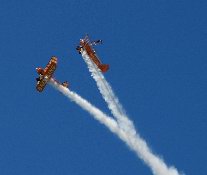 As we liked the 5 minute routine that we flew last weekend we decided to stick to that and add 2 new manouevres towards the end to fill an 8 minute slot.  The first we call a "William Tell" where Richard flies a loop and Steve flies through the middle of the loop.  The second is an "opposition bump" where the pilots fly towards each other and do a "Breitling bump" in the middle of the display area.

We're off to Woospring Wings next weekend - always an enjoyable show with a compact flying area so the crowd get to see the models well.
Posted by Baby Wingwalkers at 13:58 0 comments

Last weekend was our first public display this year.  The Cotswold Airshow is a 2 day full size airshow in Gloucestershire but they also have a few slots for model planes.

This year the models all had a local theme.  A model Hunter to fit in with the anniversary of the planes that have a long connection with the airfield; a model Hercules and the Baby Wingwalkers which are both modelled on aircraft that are based nearby.

We also put a video camera on one of the planes during Sunday's flight so you can see what Cotswold Airport (still known to regulars as Kemble) looks like from the air and some of Baby Danni's manoeuvres during the flight.

The weather on Saturday was wet and windy but we were lucky and did still get two flights.  The others weren't as lucky because the morning model slot was cut short to let the Dutch Hunters land so the Hercules couldn't fly and our additional slot at lunchtime was brought to a rapid end by torrential rain so the Hercules lost its flight again.  We were lucky as we flew first and the rain held off but poor Geoff flew the Hunter in horrible rain.

Fortunately it was still windy which dried our clothes out so we didn't have to spend the rest of the day squelching round.  We were hoping to have a picture in the Sunday Times as their photographer spent a long time setting up a shot with us - but it never made it to print.

Sunday was much better weather and photographer Chris - who is also a highly skilled rigger/ derigger and plane pusher - took some gorgeous photos of the planes sunlit against the dark clouds.  See more of our photos.


So, another successful weekend and good to see the variety of aircraft there.  You can see some great photos of the full size on the Cotswold Airshow Facebook page and in this forum.
Posted by Baby Wingwalkers at 15:11 1 comments