Last weekend we had a relaxing day at Chedworth at their annual barbeque. It was nice to be able to fly when we wanted to without the constraints of a show programme and to have lovely sunshine and warm weather.


At Cosford we had problems with Richard's engine but during the week we made the same modification that we had to Steve's when he had problems with his engine earlier in the year. It seems to have been successful as Richard had quite a few flights without any engine trouble at all. 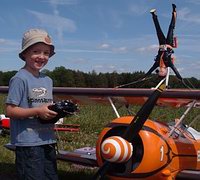 One of the club members brought his grandson along for an hour or so and in true modelling tradition spent most of the afternoon there. His grandson was fascinated by the wingwalkers and he has now become the youngest person to operate them in the air (with a few reminders as to which switch operated which limb). 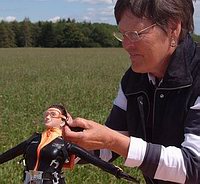 Baby Wingwalker Sarah also had her hair replaited because it had become quite untidy, which is hardly surprising when you think of how much it gets blown around in the air. You can see the forces the wingwalkers are put under if you watch any of the onboard footage.
Posted by Baby Wingwalkers at 04:02 0 comments