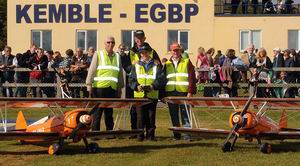 On 17th and 18th September it was the Battle of Britain Airshow at Cotswold Airport. We flew at the spring airshow there and really enjoyed it so were pleased to be invited back as part of the model aircraft flying display.

Richard also took along his Mosquito, Steve took his Bronco and Anson and we were joined by Eddie from the Swindon Club with his Corsair and Spitfire. Chris - our trusty helper and photographer was also there.

Our slot times tend to get moved around at full size shows because of the arrival and departure of aircraft so communication between everyone involved is important.

We were really lucky with the weather on both days because, apart from one big shower that soaked us and the planes on Sunday, the rest of the showers skirted around us. The wind on Sunday wasn't pleasant but it was still possible to fly and by the Saturday it was much calmer.

We found it a real luxury because Costwold Helicopter Centre generously allowed us to use their hangar to put the planes in overnight and we also had somewhere to take them to pieces on Sunday evening which meant we kept dry.


We thought we would lose our slot on Sunday because it poured with rain when we were due to fly. It wouldn't have been safe to fly in rain that was that heavy because of the risk of water getting into the planes' electrics. Fortunately there was some space in the schedule so we managed to fly once the rain had eased off. We don't like letting people down but we also don't want to take unnecessary risks.

A few of the planes couldn't display because of the weather and mechanical issues but we still saw some good displays. The Tiger Moth 9 were spectacular, flying in formation similar to the Red Arrows. The Lancaster and Spitfires were special to watch as always. The Antonov displayed on its own as well as droped the Renegade parachute team - and was a useful shelter for some of us during the downpour. The Red Hawks gave a graceful aerobatic display.

See more pictures from the show on our Facebook page.
Posted by Baby Wingwalkers at 13:03