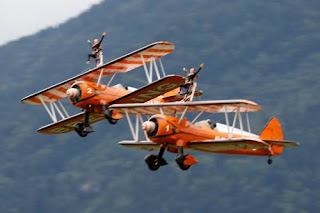 The Bex airshow only takes place every 5 years.  So we were really pleased to be invited to the 2015 show.

With 2 vans fully loaded with the Baby Wingwalkers and a few other models we set off from South West England on our 500 mile journey.  24 hours later we were very glad to arrive in Bex.

The location is a full size airfield with a beautiful mountain backdrop.  One of the advantage of an airfield is of course the hangars where we could store the planes overnight.  But because there were so many pilots with large models it was still a squeeze. 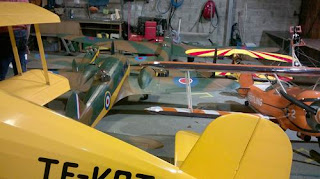 Like many European events, this was a single day show so Saturday was test flying day.  It would have been a relaxing day apart from a few mechanical problems with some of the other planes we had brought.

That is one of the hazards when models are flying regularly.  However well you maintain them, just like a car, they break down at the most inconvenient times. 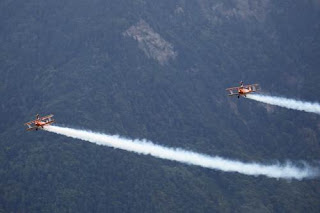 But the Stearmans were trouble free and we had 2 enjoyable flights. 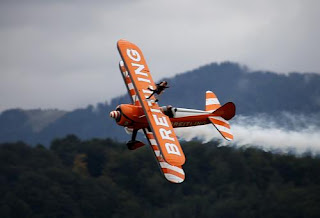 In the UK, 2015 has been the windiest year we can remember, so it was a real pleasure to fly in still air.  The one disadvantage of still air is that the smoke hangs around in the air and on a few occasions made it difficult to see the planes. 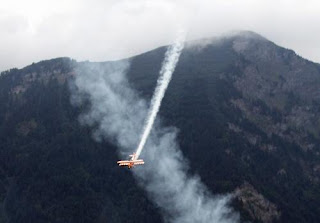 Sunday arrived with beautiful blue sky and no wind.  It was a leisurely day, though because we were parked at the end of the flightline we did get a lot of exercise pushing the planes up to the pilot's box and back. 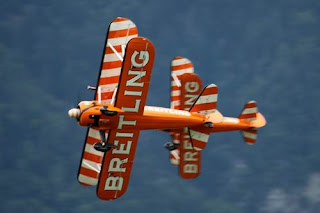 Our first flight was around lunchtime and went well - using less smoke than usual.  Our second flight was the finale of the show.  Everything went well again until we landed and noticed that the pin in Baby Danni's harness had come out and she looked as if she was going to jump off.  Fortunately the other harness strap - and of course the safety cable held her on. 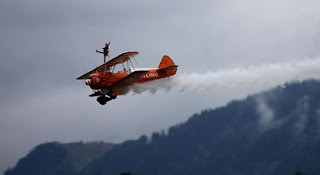 After 3 hours of packing away we treated ourselves to a few days' sightseeing in the area before the long journey home.  The scenery was stunning and we would have loved to stay longer. 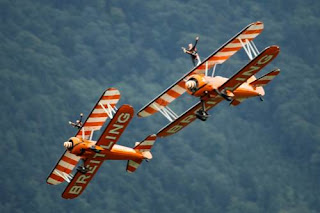 Thanks to our Swiss hosts who looked after us, the people who helped us to fix planes and the other show pilots who put on such good displays.  Thanks also to Christopher Watts who took the great flying shots for us.

Posted by Baby Wingwalkers at 00:55