We were incredibly lucky with the weather at Cosford this year - which might seem an odd thing to say when you find out that we packed up at 2pm on Sunday because of the rain.  But the weather forecast had been for rain most of the weekend and yet from Saturday at 10am it was rain-free and until 2pm on Sunday it was almost rain-free.  So there was lots of flying for the visitors to see.

Richard's engine lost power during both flights so he elected to land early rather than have to go for a long trek to retrieve the model if he lost the engine completely.  It was frustrating because the previous day he had flown 4 times with no engine trouble at all and nothing had been changed.

As the engine was showing the same characteristics that Steve's showed a few weeks ago, since the show we have made the same modification that his engine had so hope it will now perform well again. 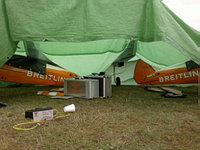 Steve's Bronco has been a useful addition to the show models this year.  He likes flying it but it's also useful on the flightline.  At a couple of shows it's been a welcome sunshade but this weekend it was useful as a tent.  We put the tarpaulin over it, put the other models underneath and could actually dismantle the Stearmans in the dry - though it was a bit cramped.
Posted by Baby Wingwalkers at 13:32