Bringing this blog right up to date, this weekend we flew at the Model Show at the Fleet Air Arm Museum at Yeovilton.

The weather wasn't as bad as the original forecast but we only managed to get in one flight due to the heavy rain showers.

The flying display is only part of the overall show and during the rain we took the opportunity to look round at the variety of models that were on display.  There was everything from Airfix models to carved wagons, spaceships, fantasy figures and Meccano diggers, all packed tightly around the museum's planes. 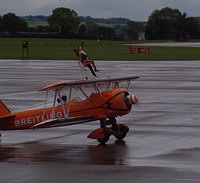 Outside there was also a good crowd who watched the flying displays that included warbirds, biplanes, jets and a glider as well as our Stearman and wingwalker.  Because there was a short display time we only displayed one plane and wingwalker, which was just as well because the rain showers seemed to give us just enough time to assemble or dismantle one and then the heavens would open.
Posted by Baby Wingwalkers at 09:57