After a season of flying one of the Stearmans here are some of the impressions from one of the pilots, Steve. 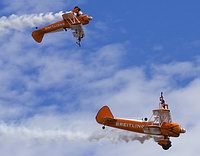 I use the rudder a lot to slip the plane into position.  I can't use the ailerons and bank because people will see that the wings are different to the other aircraft and so it spoils the look of the display.

The point at each end of the circuit is the most critical part when you're flying in formation because both pilots may be going into the turn at different speeds which then means we will enter the next manoeuvre at different speeds. If you don't get the formation right at the end then the manouevres in the middle will never be correct.

The Stearman is a simple aircraft compared to some of the planes I fly.  It doesn't have retracts or flaps but it has its own complication in that the wingwalkers make it top heavy so you have to allow for that.  The wheels have a narrow track so, as we have experienced at most shows this year, it is difficult to land in a crosswind.

My favourite part of the display visually is when we put the smoke on - especially when there's a blue sky too.

As I come in quite low and slow it's not a place where you want the engine to stop!


Photos copyright Neil Hutchinson & Chris Bowler and may not be used without their permission.
Posted by Baby Wingwalkers at 10:55