Construction information about the Baby Wingwalkers

However great the planes look, the model wingwalkers always steal the show.  We are often asked where people can buy them and the answer is "you can't" because they have been individually hand made. 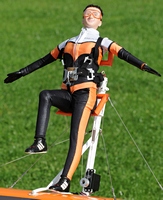 The arms and legs are carved from balsa.  Richard tried making moulds but found they were too heavy if they were moulded.  The bodies are made from a two-piece fibreglass mould, using lightweight cloth,  The bodies are slightly larger than the real wingwalkers because there has to be room for the 2.4 GHz receiver inside which powers 5 mini servos that move the arms, legs and heads.

Each head is individual and based on one of the real wingwalkers from the team, currently we have Sarah and Danielle.  The heads are carved from plastic wood, a two-piece silicone mould is made and filled with fibreglass.  Richard tried a slush mould head but it was too brittle and he couldn't get a consistent thickness.  After all the trials he now has a box full of heads! 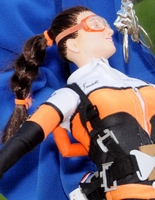 Probably the most time consuming job is stitching the hair into place.  Richard made thousands of 1mm holes in the heads and each hole had 6 strands of hair hooked through. It took 3 long days per head, working 15 hour days.  Danielle's hair took slightly longer because 3 colours were used to match her hair colour.  The hair on the models is slightly longer than the real wingwalkers' hair because it's real hair so it is proportionally thicker and so not as supple.  When it's longer it holds its shape better because of the extra weight.

The costumes are also hand made, using pictures of the real ones to work from.  Because the fabric pieces were so small the patterns were turned into computer drawings and then laser cut to get them as accurate as possible.  Then they were sewed on a standard sewing machine. Lycra is not easy to work with at the best of times because it stretches, but with such small pieces it was very difficult and there was some unpicking and starting again.


Finally, each model has a watch which is a commercially available 1/4 scale one that has been repainted orange.

Photos copyright of Chris Bowler.
Posted by Baby Wingwalkers at 13:15